"The Wrights fulfilled the ancient prophecy; " They shall rise up with wings as eagles."

With this book, the myth is exposed. The untold love story of the man who invented the airplane and Belle, the relationship that has been hidden, the secret protected all these years. The story of one man's fight, alone for nearly three decades against the US government. He felt for his brother's honor that he had to battle these overwhelming forces. His resiliency and passion caused him to win at the end.

At the Oshkosh airshow in 2014, the largest in the world, the author spoke on aviation and WW I. This book includes WW I.

"It takes two wars to test a new weapon."

Wings, mans’ first controlled powered flight.  The Wright brothers, Orville and Wilbur, were catapulted into the spotlight after their European demonstrations of their brainchild, the Flyer.  They astounded the world.  The story of their invention is well known but what were they really like?

Well researched and documented the author has found new material for the second book on the famous brothers, material lost to history.  There is much on the Wrights that is not out in the open.   It is fascinating stuff; two of the most famous men in all of history, men who inspire us.

Touching on the Wrights’ character the book brings to light new knowledge.  Included are interviews with those who knew the surviving brother, Orville.

The brothers’ contribution to flight did not end after the first decade of the century.  Flight fever, the new aerodynamic science, with its raw excitement and inherent danger, had exploded on the scene by 1910.  This was the year the Wrights introduced their invention to the American public.  Through all the trials and tribulations, the flight demonstrations, the establishment of flight schools, the brothers never lost their amazing confidence in their ability.

At their flight school they trained pilots who would become America’s leading warriors in two world wars.  New facts are illustrated on the Wright activities in 1910 and 1911, years of enormous and interesting productivity.

This book can be ordered. It is the same price as Book I.

Leading mankind into a new age, Orville and Wilbur Wright made over 300 flights in the year they demonstrated the airplane in Europe. The Wrights achieved a level of celebrity so unbelievable, there has never been anything like it since. Their saga is unprecedented in the history of mankind. Their courage and the breathtaking beauty of their flights astounded the tens of thousands of spectators watching from below. In France, Italy and Germany, today, there are statues and streets dedicated to the Wrights. There were songs written for them. The Wrights even influenced women's fashion as Paris designers copied the "hobble skirt" or the skirt of the women passengers with rope tied around the bottom. Everyone in Europe was wearing a version of the cap Wilbur wore on every one of his flights.

From the moment Wilbur Wright took off in his biplane on August 8, 1908, the world would not be the same. The eyes of everyone on the planet were turned to the race course in France as Mr. Wright demonstrated with great agility his heavier than air flying machine. The magnitude of the Wrights' achievement can never be overestimated.

The Wrights' year in Europe made aviation a practical reality as they demonstrated the Flyer, taught students to fly and aided countries in Europe to produce planes. The week they first flew in France, was the week that changed the whole world. The Wrights captured the imagination of a planet. Never before had there been such a dramatic demonstration of applied science.

Wilbur Wright - The Best and Brightest of us all - Oakwood Register, Dayton, OH (PDF) 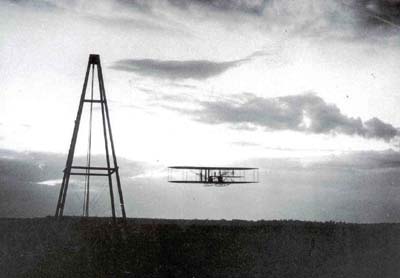 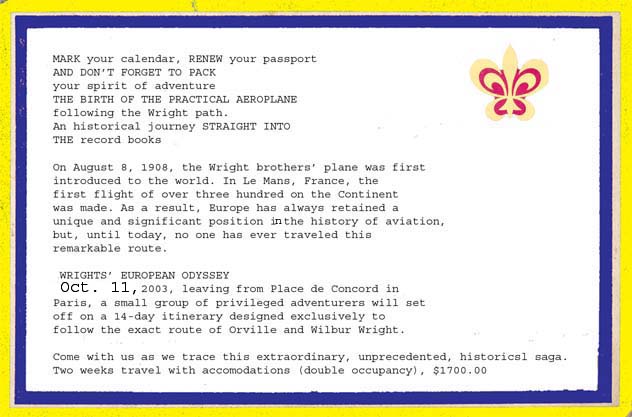 Additionally several cocktail parties in chateaux and a royal palace

To Orville and Wilbur Wright

Soar into the cosmic blue
There are other worlds to explore
All that is out there is open to you
Soar to the universe of life and peace
And fly to the rim of heaven.

The history of flight from the Wright Flyer to the Centurion